Swedish Indie-poppers Shout Out Louds have their newest (and fourth) album Optica out. The moment of truth - can the Stockholmers deliver again? Strongest track is by all means, Walking in Your Footsteps clearly inspired by MGMT and their song Electric Feel. I mean, come on! But it is still an ace track. As in the MGMT album Congratulations, the band here has also chosen to diversify each track to sounding like many in a single track, just see Glasgow. Still, we like diversity in music. As usual, most of their albums consist of excellent sad tracks like 14th of July, the emo-noise-indie Destroy and chilly Blue Ice. But there is also the happy song Sugar or Illusions, and funny sounds are heard in Circles. An extra plus for the mezmerizing female vocals in Hermila by Bebban Stenborg. All in all, the guys deliver without coloring outside of the lines of Lagom when it comes to timeless Swedish pop music. Basically background music for any occasion. 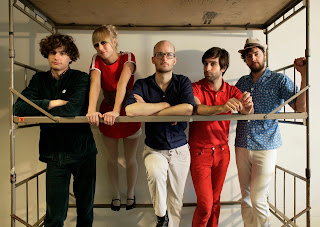 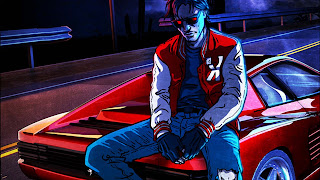 80'ies style eletrographer Kavinsky made it big with his Nightcall in the crap movie Drive two years back. Although this is the strongest track on the album Outrun (name from epic SEGA video game) from last month, some others are worth mentioning. But be ware, if you do not like cars, you might be put off by the album. Like the first track Prelude, about the creation of Deadcruiser, is a superb track if not for the talking all the time about soul splicing and vehicular hybridization. Track Protovision smells strongly of the excellent track Illmerica by Wolfgang Gartner, be sure to see the video of the latter. For some hip-hop techno, do not miss Suburbia (No YouTube video!) with Havoc or First Blood (only in crappy Live version, much better on the album), or for some more retro techno, try Roadgame. Coolest track is Testarossa Autodrive with clear associations to going fast down Autobahn in a red car presumably, and is already 6 years old, with a remix from fellow Frenchie SebastiAn here. Finally, a really nice one to leave off with is Odd Look (let's try SoundCloud then), with similar flirtation with Wolfgang Gartner. Give it a go.
Upplagd av LCHF chef William kl. 14:37 2 kommentarer: 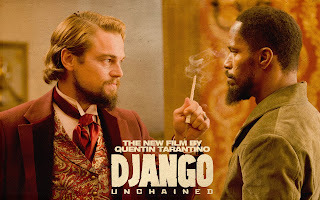 The latest Quentin Tarantootie blood bath came with a western twist, naturally including Italian falsetto scores. Not to mention the best of the best scenes from the movie according to the creator himself, including Five-Thousand-Dollar Nigga's and Gummy Mouth Bitches and In That Case Django, After You.... What I am talking about is the Django Unchained Soundtrack with 24 diverse tracks with various scenes from the movie in them. Strongest oldschool track would be  Unchained with Tupac and James Brown, keeping it real as usual. Strongest old-oldschool track is Nicaragua by Goldsmith, for sure. For all Italians, the Ancora Qui should put you in your place. 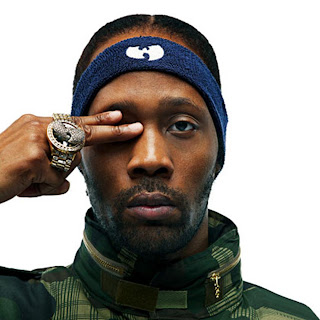 Still, this might be a bit difficult for most of the sponge-head mainstreamers out there, so to level the playing field, try Too old to die young, which is easy-listening for the most. Personal favo is 100 Black Coffins with Rick Ro$$, while the most soul-ful is Who did that to you? by John Legend. Optimal if you like wailings. The smooth Trinity by Franco Micalizzi & Annibale, known for their spaghetti western tracks from way back when. Finally, probably the best track if not for the distrotions in the background Ode To Django by the baddest man alive, 43-year old, Robert Fitzgerald Diggs or RZA, the leader of the Wu-Tang clan. Seen to the right. Something for all of us, then.
Upplagd av LCHF chef William kl. 14:14 Inga kommentarer: 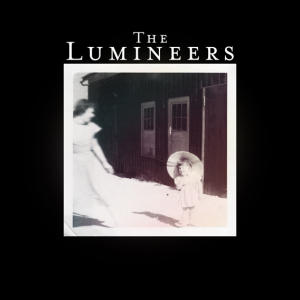 Wesley Schultz (birthdate unknown) and his gang of Colorado cornholers released their debut album in late 2012, self-entitled as The Lumineers. Originally Wesley and his buddy Jeremiah Fraites cruised around New York/Jersey before they settled in the South Park State. The album is an amazing folk compilation that only Band of Horses and Cave Singers ever came close to. My prediction is one or two more excellent albums by The Lumineers and then crappy ones. All-time favorite track is Hey Ho - we need more happy folks on this planet. Indeed, Big Parade is a nice contribution to joviality.
Then there are the love songs - the sad one Slow It Down, the happy one Flapper Girl and the neutral one Dead Sea. Don't miss the reborn The Killers in Flapper girl. Finally, Submarines will be etched in your auditory cortex - with lyrics that make perfect sense again.

Definitively Cave Singers inspired track include Stubborn Love, but the important point is that a novel album like this still remains diverse and not niched. So let's enjoy it while it lasts, before they get too good at one thing in particular and forget how to excel in all other areas. Sad, but true - and the natural course of melodic events.
Upplagd av LCHF chef William kl. 14:01 Inga kommentarer:

TImberlake and the 20/20 experience 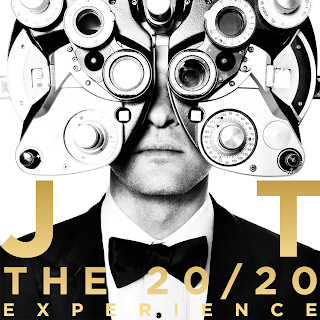 32-year old Memphibian and former Britney Spears/Cameron Diaz/Scarlet Johansson-boytoy Justin Timberlake (currently with Jessica Biel) came out 4 days ago with the album The 20/20 Experience. The name comes from the Visual acuity scale, meaning normal vision - in metric terms 6/6 - because apparently, people claim to be able to see the songs (according to JT himself). And that is about as interesting as it gets. If you expected the sexy to return once again, you will be disappointed gravely. Largely a luke-warm blanket that will dissipate sooner rather than later into nothingness, The 20/20 Experience offers little but falsetto and timid beats. A plus for the Ratatat-flirtatous riffs appearing every now and then through-out the songs, check out Blue Ocean Floor.
Fave track Tunnel Vision with frikkuh-frikkuh-Timberland might be replayed a few times, sounding like the classic post-N'SYNC-de novo Timberlake we knew when I was not even in puberty. If that, for some reason, tickled your fancy, then be sure to click Mirrors for some beat boxing and melodic hissing and mouth farts. Finally, J_H_V_A on Suit & Tie with morphed voices in the background, which is the latest craze these days, confer to A$AP Rocky's latest album. Fanboys, try to keep it in your pants until November, when the second part of this album comes out.
Upplagd av LCHF chef William kl. 12:03 Inga kommentarer: 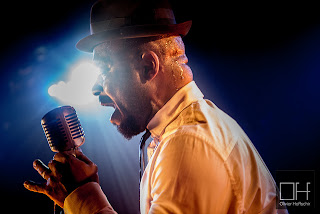 British Bath rockers The Heavy with Kevin Swaby (seen sweating to the right) singing in American English for some reason. The lyrics actually convey a meaning, something lacking in the music of this day & age. We all know them for their track How You Like Me Now? form their second album The House That Dirt Built, released in '09. Their first album from 2007, Great Vengeance and Furious Fire featured their strongest track Dignity with convincing electric guitar riffs already from the get go. Also, some real actual bona fide Brit-style dialecting in Girl, something Mr Swaby should go for more often. Don't miss Colleen with wailing and trumpets, likely with a sweaty Kevin too. On a happier note, In the Morning - juxtaposed to the melancholic Who needs the Sunshine. Not a bad start for the band. 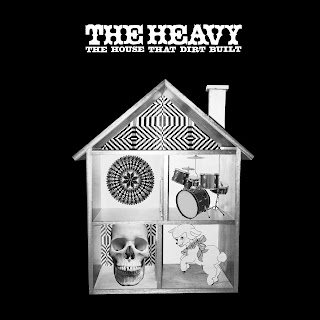 After that, came The House that Dirt built, with the aforementioned big track. On a steady heavy note, the album delivered without much surprise. Another class track being Short Change Hero. Other than what, patient fans awaited more audible tracks.
Three years later, in 2012, the The Glorious Dead sprouted with Same Ol' bringing home that long-sought-after soul bacon right next to the indie pop sunny-side ups. If you were impressed by that then do not miss What makes a good man, that would fit perfectly to a James Bond flick any day of the year. Fully taking over all what Amy Winehouse created before celebrity-ing herself to death, the Heavy created Blood Dirt Love Stop - seen here in the Sucker Punch video. Whatever that is. A bit funnier, with a nice (official) video, is Can't Play Dead that has that nice live-music sound to it. Finally, a mention of The Big Bad Wolf is in order. If for nothing else, then at least for the trumpets in the intro and the howling of Kev. Patiently we wait for another 2-3 years for the next attempt.
Upplagd av LCHF chef William kl. 13:02 Inga kommentarer: 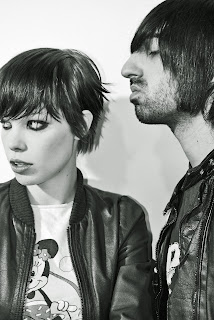 (III) came out last year straight out of the brains of Ethan Kath and Alice Glass, reaffirming Canadia as the new nexus of electronic music, together with Grimes. That is, at least until Shaking the Habitual is released on the 8th of April and the gold arch is returned to Sweden. This third album does not surpass what the second had already played out, featuring more white noise than actual melodic concoctions. Top three tracks of III are, firstly, Wraith of God with scary and melancholic undertones. Then, the more disco-flirtatious and tempo-beating Sad Eyes. Finally, the amazing Child I will hurt you, the most pleasant track probably ever produced by the duo.
If you were not put off by these tracks, try out Transgender, with a creepier picture to stare at during your auditory hypnosis.
Upplagd av LCHF chef William kl. 14:37 Inga kommentarer: 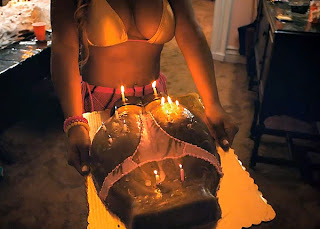 Tauheed "Tity Boi" Epps is a 36 year old Georgian that sometimes refers to himself as 2, douce or 2 Chainz because he thought Tity Boi is derogatory towards women. This has not stopped him from eating cake in the shape of a lady's derriere as in Birthday Song at 0.40 (or in the pic to your right). This track is furthermore the strongest on his first studio album Based on a T.R.U. Story, with Ye making an appearance on a bicycle with breasts on top. 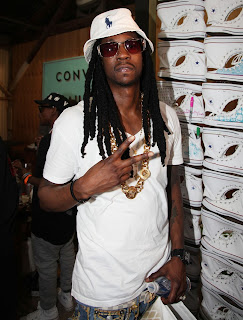 Although mindless rhyming (sometimes not even actually rhyming) is standard in today's post-gangsta-rap hip-hop scene, the sense of self-irony that shines through albums like these is a pleasant relief from grimacing tough guys who make songs about what tough guys they are. In this respect, the vocal style of 2 is similar to that of Jay-Z but to a lesser degree predictable (and understandable overall) - just listen to I feel good.

On second place of hottest tracks, I Luv Dem Strippers with seriously self-ironic and blond pink-lips Nicki Minaj with a hundred thousand dollar engine. Do not miss the track Wut We Doin with 2 making sounds in the background. Not bad. Finally, Crack about cr'nack and his biography.
Upplagd av LCHF chef William kl. 14:21 Inga kommentarer: