18 months later with a Scotsman 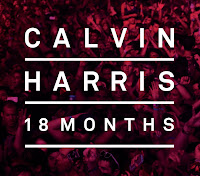 Scottish DJ Calvin Harris released his album 18 months four months ago, featuring massive tracks like We Found Love which has a very long intro in the video, but at least it is with Rihanna. And, on the Japanese bonus track (for some reason), the remix by R3hab of Bounce with Kelis - patiently, we await her new album, by the by. Next, with Ne-Yo - Let's Go with a video from Brazil, bringing home the fat base lines, yo. Personal favourite, it Awooga with Mr Harris comma Calvin looking snazzy in his lab coat. Then, the already famous Feel So Close, I Need Your Love and Sweet Nothing with Florence without the machine. Wow, first he created disco on his own and now this?? What a great album. Must have been some rad-ass eighteen months for that guy.
Upplagd av LCHF chef William kl. 13:34 Inga kommentarer: 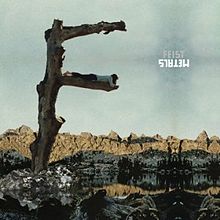 Long overdue, since this album was out in 2011 and since then stuck on my iPhone, but here goes. If you like Canadian songsingers and songwriters, this is straight up your back alley. Expect songs that sound similar to that of Cat Power but with a 'nadian twist meaning it is not quite the same but she gets top marks for trying. Just see How Come You Never Go There and tell me Charlyn did not influence this. A tad of Norah Jones in The Circle Married The Line, but now I am just name-dropping. My favvo track is nevertheless Graveyard with a nice The Knife-like video (confer to this). Then, chiggedy-check out Bittersweet Melodies and tell your friends about it, because it is not known yet and you will get trendsetter points. Most original track will have to be A Commotion, here in a live recording as no original track exists on YouTube. Not too bad I would say.
Upplagd av LCHF chef William kl. 13:37 Inga kommentarer: 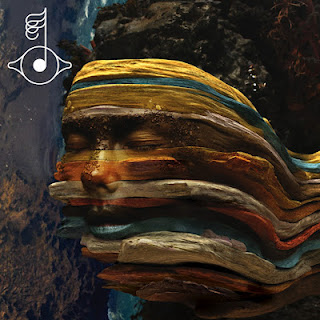 About a month ago, soprano Björk Guðmundsdóttir - the Icelandic Lady GaGa - turned a staggering 47 years old. Two days before, her third remix album Bastards came out. While her voice has most definitely aged, she is still able to hit the high notes, at least judging from the Mutual Core (Herberts Remix), that also appears as a Mutual Core (These New Puritans Remix). Herberts Remix features drum'n'base that sets it apart from the other tracks with respect to quality and style, while the These New Puritans Remix includes singing of the Solomon Island. This should tell the reader what to expect. A massive repertoire is unfolded right in front of your ears. Strongest track is by no doubt the arabic inspired Crystalline with Omar Souleyman from Syria. This song should be on repeat for all peeps. I leave it to the listener to discover the rest of what this album has to offer - one thing I can assure you of. You will find a song that you like.
Upplagd av LCHF chef William kl. 11:54 3 kommentarer: 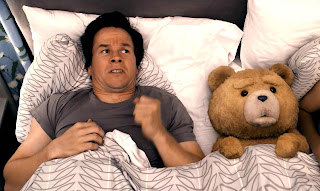 The producer, forever known as Peter Griffin, Seth MacFarlane employed the still-sixteen-looking Mark Wahlberg (left of the teddybear in the photo) and former that 70's show star Mila Kunis to create the highest-grossing original R-rated comedy of all time (source). As with most of MacFarlane's work, expect to laugh to dirty jokes, to baffle at his imagination and finally to see an ending that allows for a sequel so that he can make even more money. MacFarlane is not the type to make Bambi-movies, let's just leave it at that. If you consider yourself a 16-45 year old male still struggling to escape his anal phase, this movie should fit you like the proveribal proctologist's glove.

The movie leaves the seer with a few unanswered questions. Did Ted age? If not, how come is voice changed? If so, then how come only his voice and personality matured and not his physique? Does he have vital organs? If so, then how come he is full of non but cotton? If not, then how could he get high from smoking weed out of a bong? These are the questions hopefully addressed in the upcoming sequel, where Ted likely attempts to breed with his girlfriend, yet again bringing the question of organs to the table, and possibly manages to create offspring, struggle with societal issues reflecting the struggle of minorities in the USA and finally realises that he was right all along because he followed his heart. That's my guess.
Upplagd av LCHF chef William kl. 08:17 Inga kommentarer: 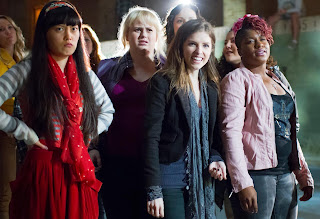 Late September 2012 brought us a musical comedy, a concept that for some reason has not been pursued by others than the muppets or in productions from over five decades ago. The brilliant casting features Australian comedienne Rebel Wilson (yes, that is her actual name; Rebel) and the ravishing Anna Kendrick in the lead role, not to mention Brittany Snow whose face you might recognise from other recent farces. Also, there were some guys in the movie which were good.

The performance in terms of songs is exquisite, mixing elements from various classical and Swedish pop hits to more recent interpretations of the hip-hopian era. A credible storyline with a few not so credible scenes punched into the scripts to defuse a movie otherwise too good? Too serious? Too non-mainstream? I gather these scenes belong in such movies for comical value in "chick-flicks" for the boyfriends dragged to the theatre against their will by their girlfriends in need of feel-good cinematics. There is one scene in the beginning and one leading up to the end with Brittany in focus, you can't miss it. Personally, I left the movie thinking "If only I could sing..." and secondly downloaded "Breakfast club". Review is eminent. Watch Pitch Perfect, it has a predictable ending, and none of us like surprises.
Upplagd av LCHF chef William kl. 07:54 Inga kommentarer: